Hunza is a fairy tale land and a lot of myth and reality has been associated to it. One thing is true of all that Hunza people are probably the most friendly people in the region. In the past it was quite common to see people crossing 100 and more years this indeed is true and can still be seen to some extent however the modern civilization has changed a lot in this valley of the longativity.

The Hunza people, or Hunzakuts are people who have lived centuries in their very own isolated valleys. They speak Wakhi and the Shina. The Wakhi reside in the upper part of Hunza locally called Gojal. Wakhis also inhabit the bordering regions of China, Tajikstan and Afghanistan and also live in Gizar and Chitral district of Pakistan. The Shina-speaking people live in the southern part of Hunza. They could have come from Chilas, Gilgit, and other Shina-speaking areas of Pakistan many centuries ago as Travel & Culture reported.

The Hunzakuts and the region of Hunza have one of the highest literacy rates as compared to other similar districts in Pakistan due to the interest of His Higness Karim Aga Khan whom most of the Hunzakuts follow as their spritual leader.

Local legend states that Hunza may have been associated with the lost kingdom of Shangri La which was mentioned in the Novel of James Hilton “The Lost Horizon”. The people of Hunza are by some noted for their exceptionally long life expectancy, others describe this as a longevity myth and cite a life expectancy of 53 years for men and 52 for women, although with a high standard deviation.

The Broshuski or Burusho or Brusho people live in the Hunza, Nagar, and Yasin valleys of northern Pakistan. There are also over 300 Burusho living in Srinagar, India. They are predominantly Muslims. Their language, Burushaski, has not been shown to be related to any other. They have an East Asian genetic contribution, suggesting that at least some of their ancestry originates north of the Himalayas 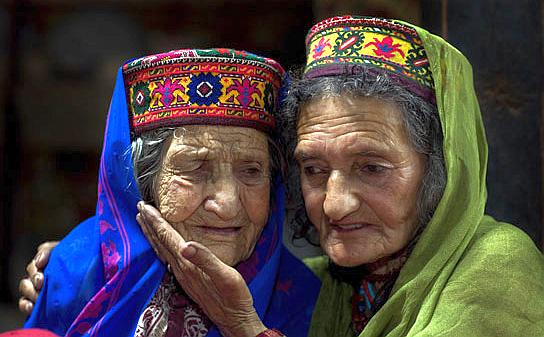 The Hunza and Macedonia

The local Burusho legend says that the people of Hunza descend from the village of Baltit, which had been founded by a soldier left behind from the army of Alexander the Great a legend common to much of Afghanistan and northern Pakistan. In 1996 an ex-patriate Macedonian linguist attempted to demonstrate a link between Burushaski and the modern, Macedonian language, and told the Hunza about the modern state of Republic of Macedonia. 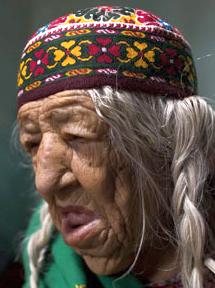 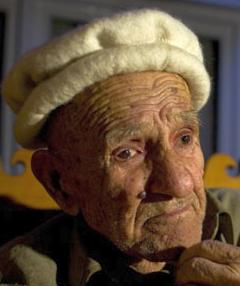 His proposed linguistic connection has not been accepted by other linguists, and genetic evidence only supports a Balkan genetic component in the Afghan Pashtun, not the Burusho. Nonetheless, in 2008 the Republic of Macedonia organized a visit by Hunza Prince Ghazanfar Ali Khan and Princess Rani Atiqa as descendants of the Alexandran army They were greeted by the Prime Minister Nikola Gruevski and heads of the church, but the opposition dismissed the visit as populism. This political support of a connection with the Hunza parallels Greek relations with the neighboring Kalash people of Pakistan, who also claim Alexandran ancestry. The issue may thus have more to do with nationalism and the Macedonia naming dispute than with the Burusho themselves